Welcome to a new series I’d like to call “Hog Tales!” With warming temperatures, the husband and I will be spending a lot more time on the Harley (aka the hog), and I’m so excited to share our adventures with y’all!

In true Jennifer style, I’ve ALWAYS got an adventure scheduled- no matter how big or small. I joke (with a lot of seriousness) with friends about being booked for weeks/months out. I’ve known for several weeks that I wanted us to take an extended ride this past Sunday, so I purposely didn’t commit to anything else for that day. Seth and I decided we’d head back into East Texas after a successful short trip to Atlanta, TX, (I’ll be blogging about that later) last weekend. Our first stop would beJefferson, TX, with the intentions of crossing the Oklahoma line before turning back southeast and heading home to Shreveport.

While getting ready to leave, Seth’s first question was that of breakfast location. Well, let’s get real, that’s always our first weekend question. We decided to grab a cookie or two (so healthy, I know) and try to make it to Jefferson. And off we went…

As with all other motorcycle rides we take, we avoided the interstate at all costs and stuck to the back roads as we headed out of west Louisiana and into east Texas. Using US Highway 80 as our guide, we snaked north and south of I-20 through Greenwood, Waskom and finally to Marshall pointing out each quaint house place along the way and dreaming to ourselves, yet somehow together, of what we’ll eventually create and build for our future family.

After a brisk few miles north from Marshall, we arrived in Jefferson to somewhat familiar territory pointing out the places we’d been on our trip there in 2015. We quickly realized we hadn’t actually planned a breakfast spot, so I whipped out my handy dandy iPhone and called upon our trusted friend, Yelp! Luckily, I looked up from my phone just in time to see that glorious beckoning sign stretched across the white picket fence of the Carriage House Bed and Breakfast signaling that they now serve breakfast to the public. Like a beacon in the night, it announced seatings at 8AM and 11AM. Lucky for us, it was 10:45 AM, so we made the block and parked the hog. 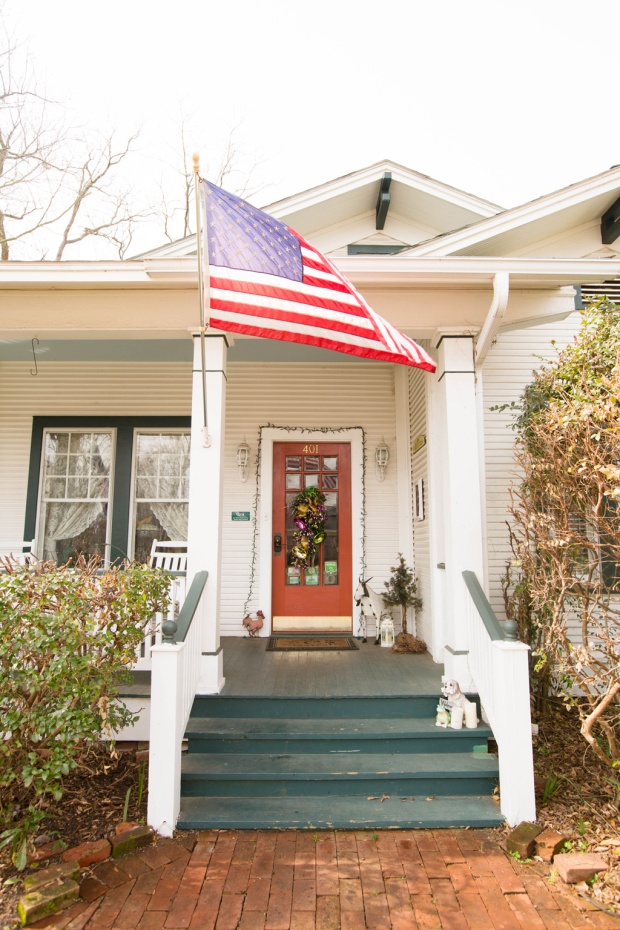 Admittedly, we were so excited for this adventure, that our attempts at entering the establishment brought us to awkwardly standing at the back kitchen door in confusion. Thankfully, we were quickly rescued by the lovely proprietor who we’d later come to know was Jessi and were invited to have a seat on the porch. 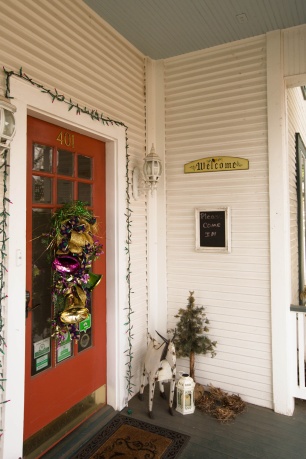 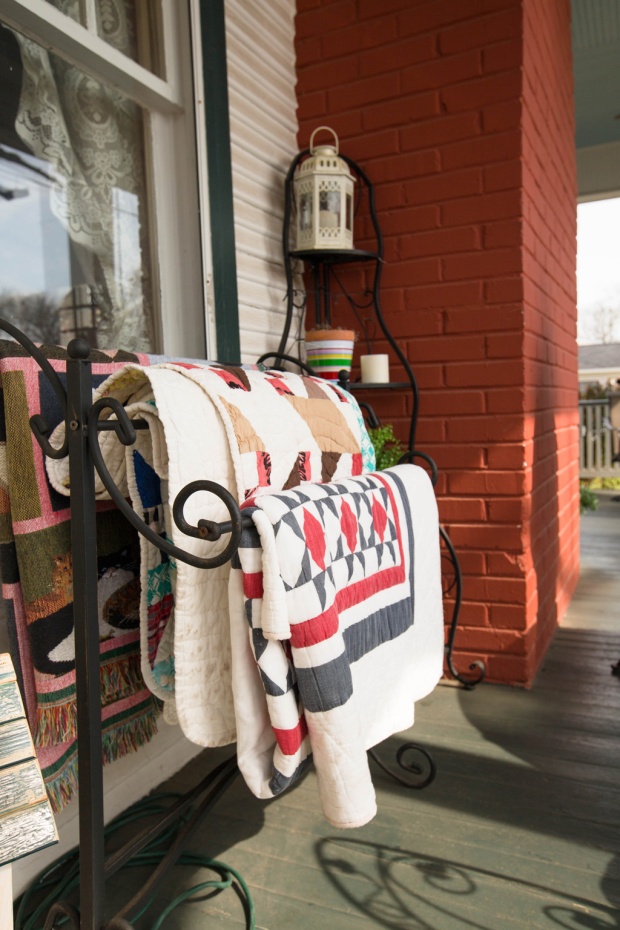 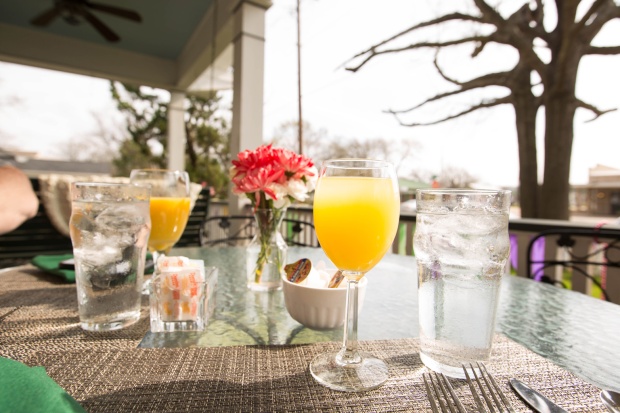 Now, this is the point where I should just go ahead and lay it all out on the line for y’all. I was beside myself with excitement. People tease me often about being excited by the smallest things, but I’d like to think that’s a beautiful thing- to be able to recognize beauty and excitement in our everyday world. In this particular instance, I was sitting on the wrap around porch of a white, classically southern home with, by this time, a mimosa in hand. To my left sat  my handsome, adoring husband and a quilt rack adorned with beautiful handiwork. To my right, I watched as a group of older patrons packed their things after a weekend of reunion with college pals. The sun shone bright and warm across our table and the surrounding birds provided a lovely choral backdrop to our perfect brunch. There, on the corner of North Polk and West Orleans, in the tiny town of Jefferson, TX, we sat daydreaming about how THIS is what we wanted for our future. It has been a dream of mine for many years to own a small restaurant/bed and breakfast/event space type area, and this was a perfectly time spot of inspiration! My creativity was practically cutting flips through my mind and hasn’t really stopped since we got home. 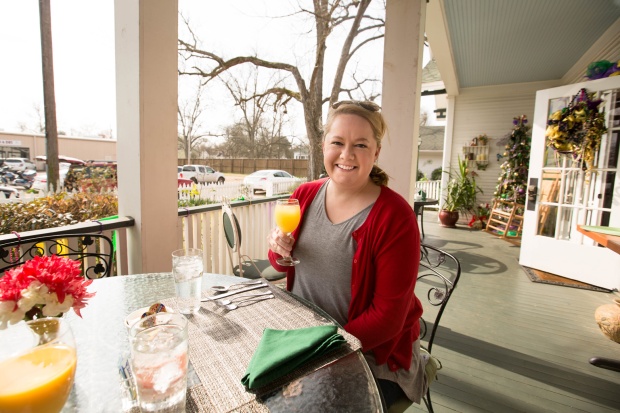 Our first course was served with two comments:

And you know what? Those were the perfect disclaimers, because our first course was a warm baked apple teeming with oats and what I assume was a caramel sauce of sorts. It was topped off with a dollop of cream and garnish of strawberry, and IT. WAS. PHENOMENAL. And, because it’s not something I would have typically ordered, I was glad to have not been given a choice, because it was truly unbelievable and not to be missed. 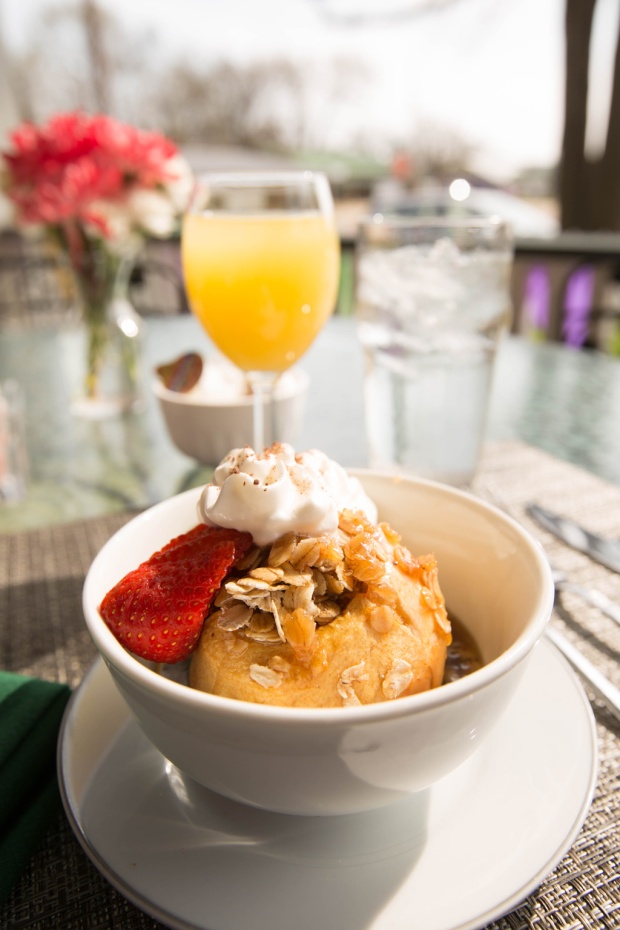 Looking back, I wish now I wouldn’t have been so cautious and would have finished off the entire apple. I only ate a little over half, because I wasn’t sure what was coming next, and I wanted to be prepared with plenty of appetite for the second course. Speaking of second course, I may or may not be drooling as I type this. Check it out.

And let me tell you, it was a million times more delicious than the picture even appears. The asparagus quiche was filled with the tastiest Italian sausage I’ve ever encountered and perfectly paired with bacon and cheddar grits and cinnamon raisin toast. What a winning combination! Also, I’m not a huge fan of blueberries, so those must have been sprinkled with magic, because they were DELISH!

Beyond the incredible culinary experience, I’d like to take a moment to dote on Jessi and her husband, BW. Jessi, a vibrant blonde with an effortless knack to make you feel right at home, told us a bit of her background and how she made her way to Jefferson from Dallas to manage the Carriage House. After looking at other potential properties, she chose to make her way to Jefferson because it felt like home and family. BW served both our courses with nonstop praise for his lovely bride and her culinary efforts (and success!).

After our meal, BW happily lead us through the 1922 Craftsman home and told of the surrounding property. Jessi and BW manage a total of 11 rooms scattered from the main house, the cottages out back, and rooms at a property across the street. Each room is named after a figure of Jefferson and/or East Texas lore including Diamond Bessie- a famous stripper brought from New York by a member of the Rothschild family who was then murdered in Jefferson. As we looked around, we made a mental note for future plans to come over and stay the night and enjoy another delicious meal. Perhaps that trip will find us bathing in the claw foot tub of the Ruth Lester room and spending the evening by the fire pit with a nice glass of wine! We also met Birdie, Jessi and BW’s three-legged Collie, who lives at the B&B. We were sure to get in some puppy love before heading back out on the road.

Before heading out, we stopped in next door at Haley’s Antiques.

After mere seconds of walking on the property, we were charmed by the quirk of the establishment and giggled as we heard the owner tell multiple people the items which they questioned weren’t for sale. There’s no wonder there are so many things sitting around; I don’t think Mr. Haley wanted to part with many of his treasures! 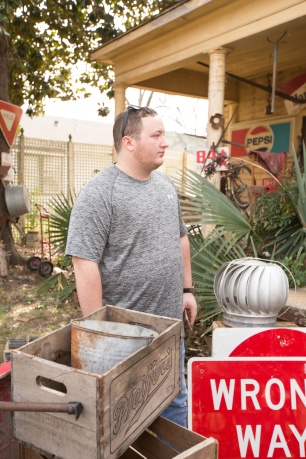 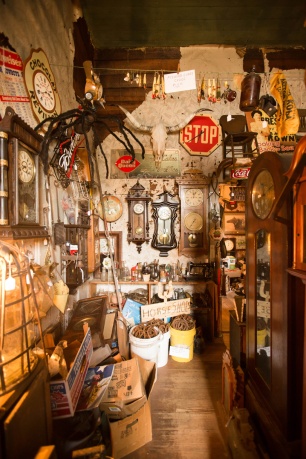 This room of clocks would have been Captain Hook’s worst nightmare!

As we stopped to make a quick restroom break before hitting the road, Seth pulled the bike into a coned area in front of the barbershop. Later, we’d come to find out, someone was planning to shoot a video in that very barbershop that afternoon. I hate we missed that! According to an Instagram follower, it was a humorous video in response to this Jimmy Fallon clip from a January show.

While there, Seth struck up a conversation with a new friend. They talked of motorcycles and Jefferson happenings, while I ventured off to document this quaint little town. 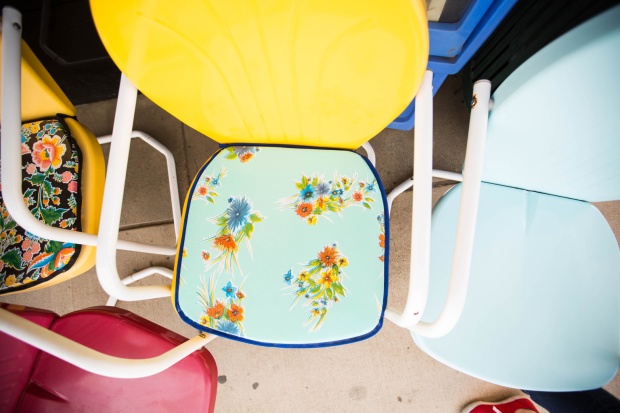 I REALLY want some of these chairs! 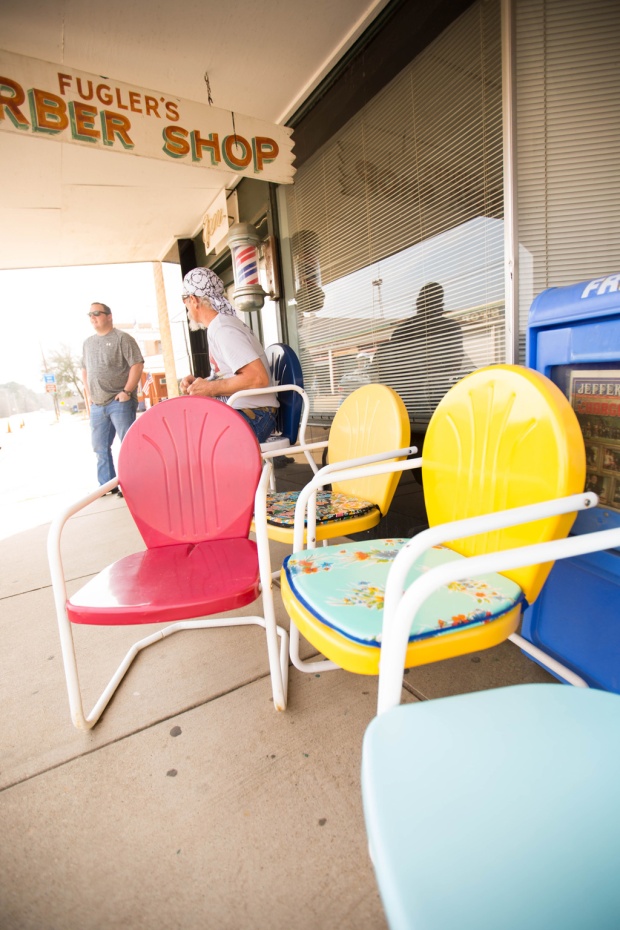 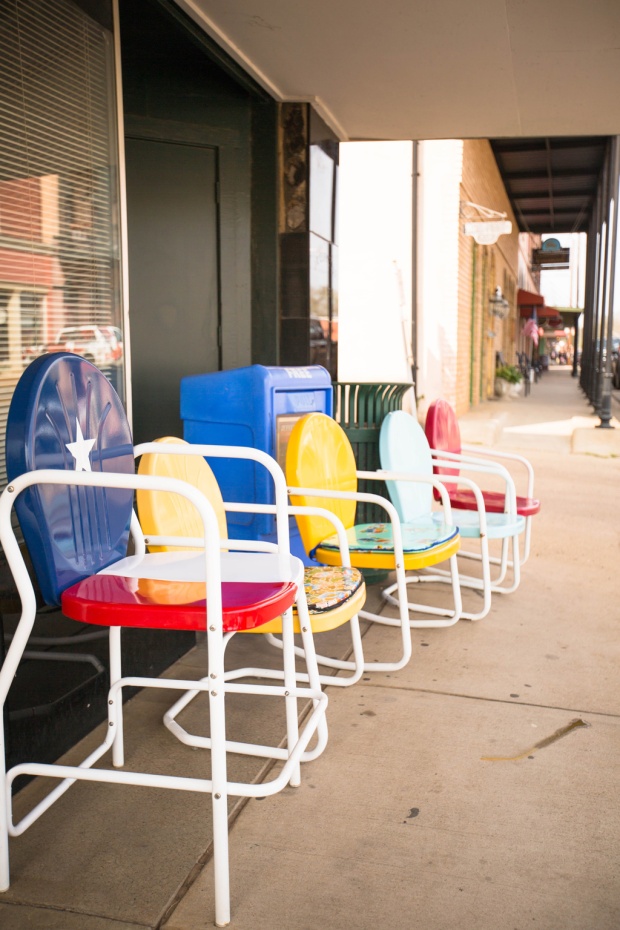 As noon came and went, we knew it was time to hit the road again and head north in search of Oklahoma. It didn’t quite go as planned, but turned out pretty great anyway.

Be on the look out for the second part of our day soon!

If you’re interested in staying with Jessi at the Carriage House, check out her website at http://carriagehousejefferson.com. Room rates range from $99-$169, and I would be willing to bet they’re worth every penny. Until March 30th, if you book 3 consecutive nights during the week (Sunday-Thursday), you receive the 3rd night 50% off! Hellooo, mid week getaway! Also, book a Friday and Saturday night in the months in February or March and receive 2 free manicures ($50 value) at the Jefferson Nail salon and one free appetizer (excluding the cheese platter) at the Knight Light Theater. Give Jessi a call at 903-665-9511 to book your stay and take advantage of these great offers!

PS – WE ARE ALWAYS ON THE LOOKOUT FOR SMALL TOWNS TO VISIT. DO YOU HAVE ANY SUGGESTIONS FOR US IN THE ARKLATEX AREA? OR BEYOND?